Automation has been near the top of everyone’s agenda for a long time – which department of a CSP doesn’t want to make better and more extensive use of automation?

But do we have a clear view of what this automation is actually for? What is its ultimate converging point?

When anyone in a CSP speaks about automation, they will most likely mean automation of operations or processes, such as tool sets, alarms and/or ticketing. But automation is a much bigger concept and goes far beyond the CSP’s operational aspects.

In a recent discussion at FutureNet World, I was part of a panel of CSPs and developers who delved into automation, its true goals and what it could ultimately mean for end users.

We hear a lot about Zero Touch Automation, where automated tools elevate people to the status of observers who can intervene if needed. This is great but it is only one step along the road – the ultimate destination is the Zero Touch Experience, where everything the end user needs happens in the background without them having to think about it. According to research by Nokia, some 60% of new revenue in 5G will come from B2B2X business models, making partner ecosystems increasingly important.

If we look at Uber or Airbnb, the starting point is not the architecture but the end customer experience – for them, it’s all about how they can offer that Zero Touch Experience.  Essentially, automation is a fundamental building block towards that seamless experience – the customer has come to buy or access a certain service and everything in your organization needs to collaborate to make that point of value exchange as painless and seamless as possible. We need to start with the Zero Touch Experience and work backwards to build the Zero Touch Automation that can make it work.

One service to bind them all

What CSPs have perhaps been lacking so far is a common theme which they can build their Zero Touch Automation around. History tells us that football binds nations – there are goals that an entire nation can get excited and work seamlessly towards. Perhaps CSPs need a similar binding act, a rallying goal for all departments to converge on. With 5G offerings like network slicing, this might just happen, a concept that CSPs can actually use to tie everything together. On one hand, network slicing can lead towards an outcome like a defined use case and on the other, it could lead to multiple domain specific automations. We need a ‘religion’ (like football) to bind all these aspects and network slicing could be the right way forward for a CSP.

It’s clear that the services of the future will not be completely within a CSP’s own environment. Up until now, telecom services have been very much vertically integrated and completely self-contained. But with 5G, things disaggregate, and you have elements of service which will be outside a CSP’s control. Without an overarching philosophy such as network slicing, this could lead to automation being tackled in different parts of the organization with varying degrees of maturity.

In the 5G era, the concept of customers has grown to include third parties such as developers as a new revenue generating demographic. The ability to provide network as code or APIs to developers is something which 5G brings to the table – the developers often have a simple and clear ask from the network and it is up to CSPs and vendors like Nokia to deliver on that promise.

This new era of services for developers was outlined by Jad Meouchy, CTO of Bad VR, who told us what he is looking for from CSPs: “I’m looking for an API, or access points, or information or datasets or something that I can start exploring and understanding and discover the possibilities. Use cases like streaming and gaming are very interesting and we are keen to see how we can make use of them – we’re always looking at what the system thinks it’s supposed to do and thinking about how we can use that to meet our needs.”

A pick and mix approach

Developers such as Bad VR clearly want a Zero Touch Experience, the ability to easily pick and choose what works for them. At an industry conference some years ago, 20 service providers were presenting their edge strategy towards developers. At the end of all these presentations, a developer was invited to comment. She said, “Believe it or not, gents, I’m here for the booze and free food. I don’t care about your 20 different distinct ways to interact with your specific ecosystems – I don’t have the time and the patience to go through all of them.”

Developers obviously do not want to do different things when interacting with different service providers. Nokia is playing its part by using automation to open up APIs with almost all of our products. As with other vendors, we need to open up our APIs via a sandbox environment, which developers can test and trial to see how applications can work. Automation is the key to this.

As my fellow panellist Pal Gronsund of Telenor said: “Zero touch is a vision that we are all striving towards.”

Javier Garcia Jimenez from Telefonica added: “Enterprises are knocking on our doors and automation is crucial for scaling our capabilities.”

These enterprises clearly want to innovate on top of CSPs’ 5G platforms. They want to pick up the right slice based service for their needs from the CSP’s catalogue and define and adjust their own SLAs. Once their CSP confirms the order, it is automatically deployed and assured for them.

In terms of what we are seeing in the market, there are a number of Proofs of Concept happening and most of these are proving technology. Repeating these multiple times is a costly proposition – at Nokia, we blueprint these POCs so that there can be a fair degree of reuse across various customers.

As well as the technical side, there are also other aspects we need to consider. Javier emphasized this when he said: “It’s also about culture, organization, transformation, not just about the technology – it’s about how we implement the new operating model. Managing the lifecycle is crucial when we manage the end-to-end 5G slice, and ultimately to provide a Network as a Service type of approach.”

We need to deliver value to end customers – opening up networks via APIs and using automation to give developers and enterprises what they want using zero touch operations, is the way to achieve it. 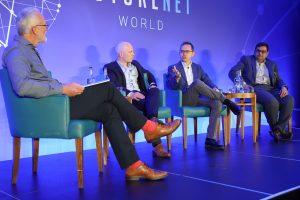